With the 70th Anniversary of D-Day arriving later this week, I wanted to post some World War II related stuff.

Who among you collected these cards back in the day? In 1965, my brother and I collected these cards. They were made by the Philadelphia Chewing Gum Company (the same company that made NFL cards from 1964 to 1967). Although the set is officially titled "War Bulletin" cards, everyone I knew that collected them referred to them as "World War II" cards.

About the same time, we were also collecting Combat cards, a set based on the 1960s TV series starring Vic Morrow. (I'll save them for another post.)

There are 88 cards in the set, with about 90% of them horizontal. About a year or 2 ago, I dug these out of my "archives" (actually, boxes of stuff unseen for decades), and put them in a binder. I discovered that I had all but two cards, #79 (unknown), and #88 (the checklist).

The series is arranged in chronological order, with each card picturing an event, along with the date and location. Card #1 features the German Army on parade through Berlin, and card #87 shows the Japanese surrendering to General MacArthur on the Battleship USS Missouri. (Big Mo was also used in the 1st Gulf War.) 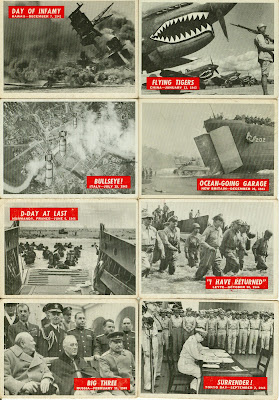 I remember as a kid thinking how cool the Flying Tigers airplanes looked.  On the "Bullseye" card, I thought it was odd that the bombs appeared to be drawn-in to the photo. 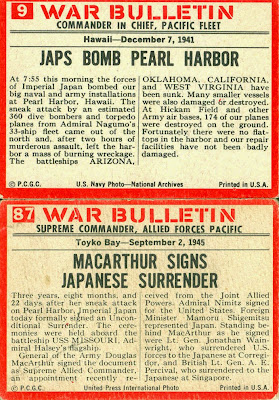 The card backs are formatted as a news release (hence the "War Bulletin"). Here are the backs of the"Day of Infamy" and "Surrender!" cards pictured at the top.